The role of nitrogen in the biosphere

Nitrogen in the environment

Atmospheric Fixation
The enormous energy of lightning breaks nitrogen molecules and enables their atoms to combine with oxygen in the air forming nitrogen oxides. These dissolve in rain, forming nitrates that are carried to the earth. Atmospheric nitrogen fixation probably contributes some 5– 8% of the total nitrogen fixed.
Industrial Fixation (Haber-Bosch process)
Under great pressure, at a temperature of 600°C, and with the use of a catalyst, atmospheric nitrogen and hydrogen (usually derived from natural gas or petroleum) can be combined to form ammonia (NH3). Ammonia can be used directly as fertilizer, but most of it is further processed to urea and ammonium nitrate (NH4NO3).
Biological Nitrogen Fixation (BNF) and its importance
Nitrogen fixing bacteria such as Rhizobium form symbiotic relationships with host plants. This symbiosis is well-known to occur in the legume family of plants (e.g. beans, peas, and clover). In this relationship, nitrogen fixing bacteria inhabit legume root nodules  and receive carbohydrates and a favorable environment from their host plant in exchange for some of the nitrogen they fix.

Effects of nitrogen on human health 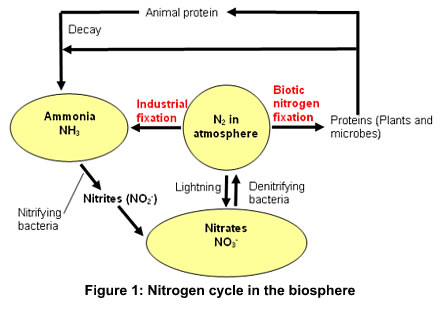